A dragon slayer, three statues and a secretive society in the center of Zagreb 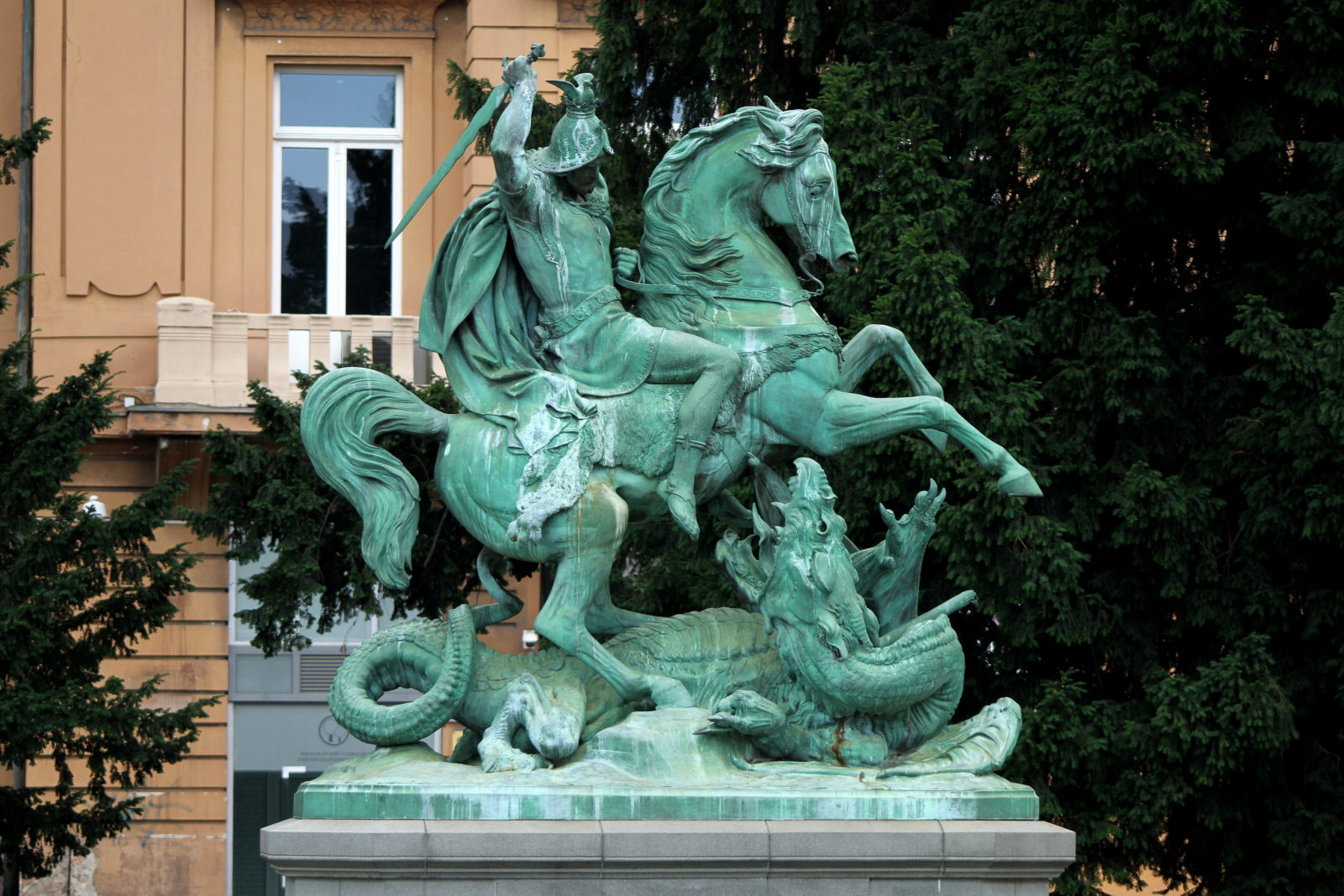 St. George (Sveti Juraj) is one of the few figures that has two statues dedicated to his name in Zagreb, both placed in prominent locations in the city. People in Zagreb, as is the case throughout Europe, always had an appreciation for Saint George, a Roman military tribune turned Christian martyr. 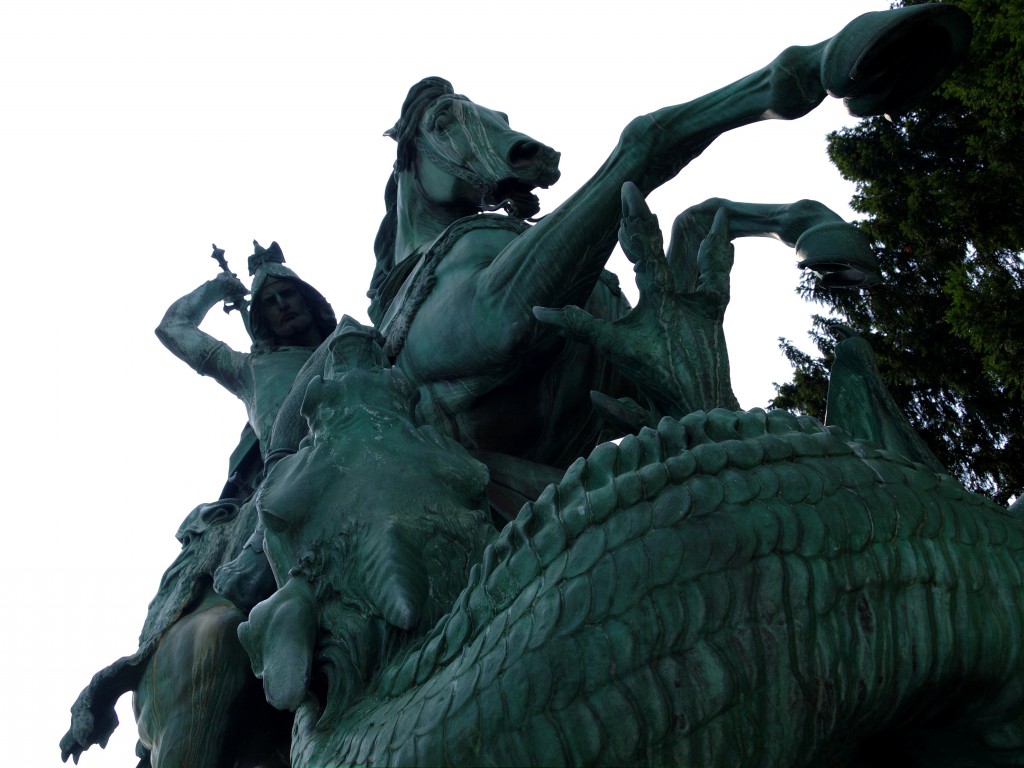 The man and the myth

George served under Diocletian and was predicted a bright future in Roman military and court (having a position of a tribune greatly improved the chances of getting into Senate). When the emperor ordered the arrest of every Christian soldier in his ranks, George, being a Christian himself, confronted Diocletian. The emperor offered lands and treasures to George if he denounced his faith, but to no avail. George was tortured and decapitated. His body was returned  to his hometown Lydda, where he was praised as a martyr by the local Christians.

That story is what is considered an honest, if somewhat broad, a recount of his life. But that’s not the story that captivates the imagination of so many artists, sculptors and appreciators. It’s the dragon slaying bit. Saint George is the first one of princess rescuing, dragon-slaying knights on a white horse from western legends. The recount as we know it is mostly taken from Golden Legend by Jacobus de Voragine, a medieval collection of embellished stories on the life of saints, but the story was told in a form of chivalric romance on European courts way before that. 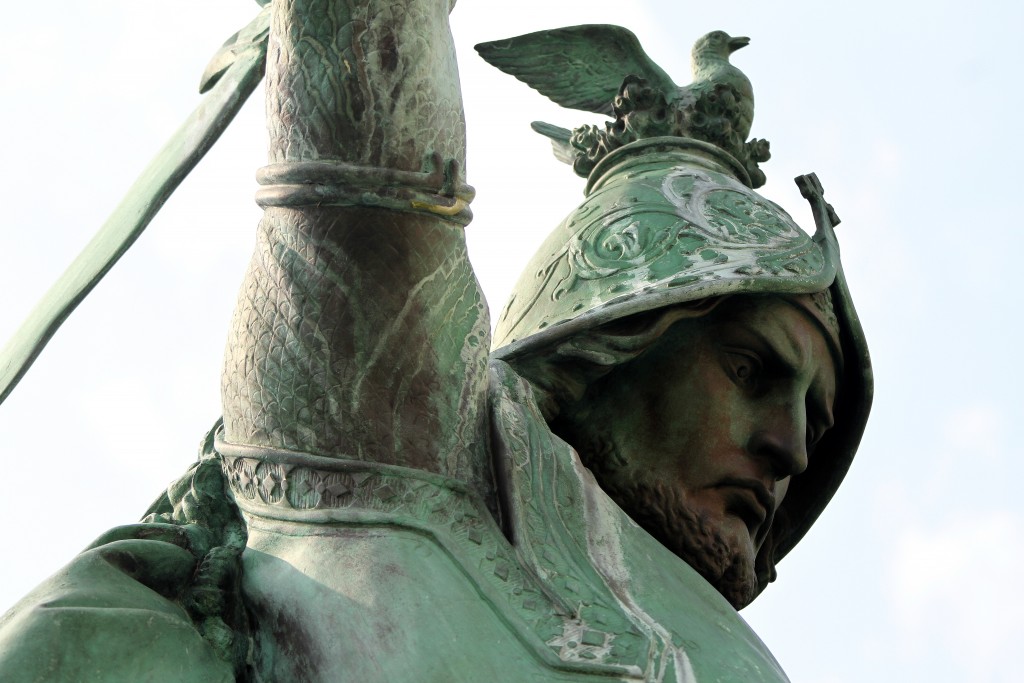 In the story a dragon has made a nest for himself next to a spring that provided water to the city of Silene. In order to get the water the people of the city lured the dragon away from the spring with sheep. When they run out of sheep, maidens would be used. They were picked by drawing lots. So it came one day that the king’s daughter was to be offered to the dragon. As the princess was being offered to the dragon, George stumbled into the city, found out what was going on and rushed to slay the monster wearing the sign of the Cross. After he defeated the dragon, the king and all his peoples turned to Christianity.

Many historians make parallels with earlier stories from Greek, Germanic and Vedic traditions, considering George to be a Christian substitute for earlier heroes of Indo- European cultures. In the high medieval times the concept of a dragon had became allegorical, representing Satan, the saint’s hardships in life or pagan cultures yielding to the new faith. 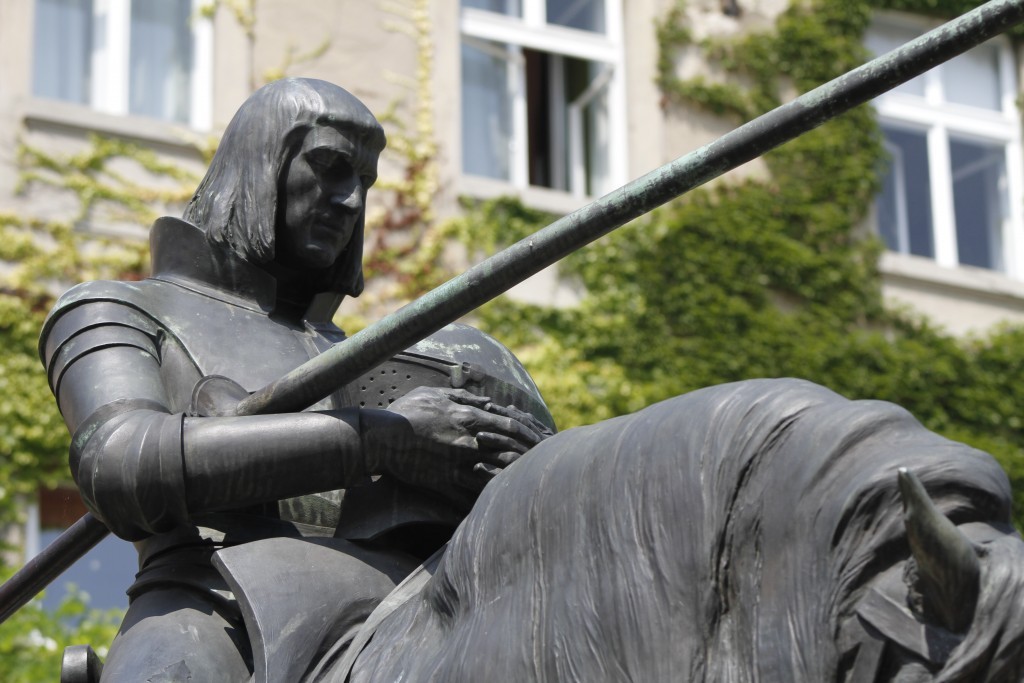 Two of a kind (and a third one everybody forgets about)

The first statue in Zagreb named St. George Kills a Dragon is placed on the southwest side of marshal Tito square. It depicts George in the act of slaying the monster, his sword about to deal a deadly blow as his steed stand on its back legs, towering above the dragon. The bronze statue was sculpted by Anton Dominik Ritter von Fernkorn in 1853 for the Montenuovo palace niche in Vienna. A second, zinc cast was made for the Exposition Universal 1855 in Paris where it won prizes and was praised for its highly dramatic execution. That cast was bought by the archbishop Juraj Haulik and placed in Maksimir park in 1867. Due to heavy damages on the zinc statue, a new bronze cast was made in 1908 and placed in its current location. A third, tin cast is kept in Glipkoteka HDLU gallery’s park of statues in the old town. 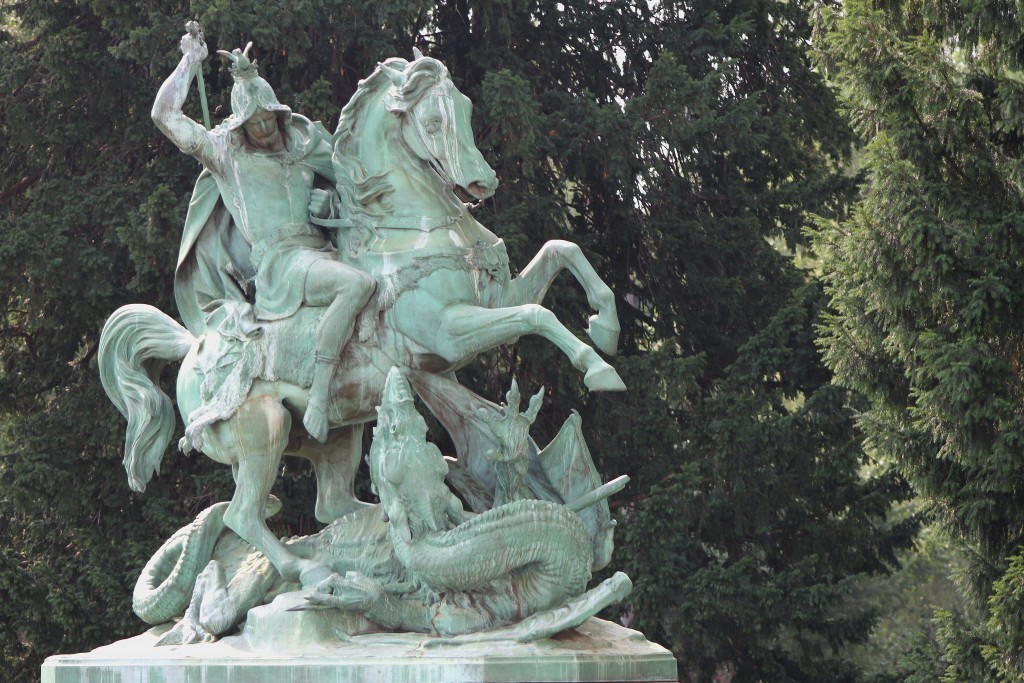 The second statue of St. George differs a lot from its older counterpart. While most statues depict the saint in the midst of battle, this one shows George moments after the dragon has been slain. He is depicted in a meditative state, sitting on his horse, dead monster beneath its legs. It was sculpted in 1906 by sculptors Winder and Kompatscher and has two parts. The saint is cast in bronze while the dragon is sculpted from the finest red breccia stone.

The statue was held in Mallnitz, Austria until Zelimir Mazuranic (descendant of the famous viceroy Ivan Mazuranic) bought it in 1937 and placed it in the courtyard of his palace.  After his death he donated the statue to Order of the Brethren of the Croatian Dragon (druzba Brace Hrvatskoga Zmaja), a historical and cultural society modeled after the Order of the Dragon. The Order of the Dragon was founded by Sigismund, The Holy Roman Emperor and king of Hungary and Croatia in 15th century to be a society of selected high nobleman who fought heretics and Ottomans (Vlad the Impaler was a member), and was inspired by the dismantled Order of St. George, making the saint their patron. 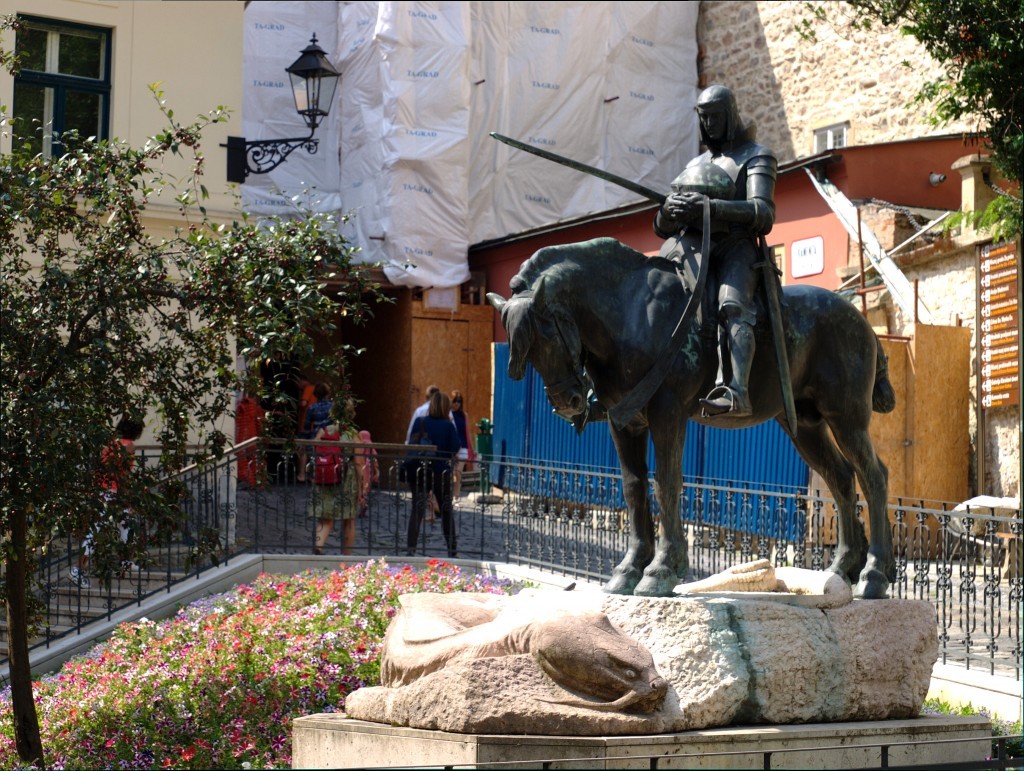 Brethren of the Croatian Dragon

Brethren of the Croatian Dragon also took St. George as their patron so the statue was a welcomed gift. They’ve placed it underneath Kamenita vrata, where the society has its residence. Members of the Brethren are to this day influential men with Nevio Setic, a publicist and politician, residing as their current Grand Master. The structure, exclusivity and ‘discretion’ of the Order has many conspiracy theorist believe they are one of the lodges of the free masons in Croatia. In communism the Order was banned for that reason (amongst some other). Some criticize it for trying to be an extension of Sigismund’s Order, one of an emperor who slaughtered thousands of non-loyal Croats under the guise of fighting hereticism. Be as it may, the Order founded many useful public services, such as the first ambulance service, city library, archives and museum. They’ve rebuild the temple of Kamenita vrata and (presumably) discovered and returned the remains of Fran Krsto Frankopan and Petar Zrinski, two national heroes, back to Zagreb from Vienna. These deeds made them, and St. George, an important part of Zagreb’s history.